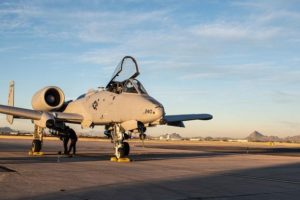 The Air Force has for now dropped plans to retire most of the A-10 ground-attack jets that form a major mission at Tucson’s Davis-Monthan Air Force Base, after the plan was rebuffed by Congress last year.

But the Air Force is again moving to retire some A-10s, and recently revealed documents show more than half of the A-10s in service aren’t deployable overseas because the Air Force is starving the aging fleet of critical maintenance and upgrades.

The Pentagon in its recent fiscal 2023 budget request has proposed retiring 21 A-10s from the Indiana Air National Guard, contending it needs to start retiring older platforms like the A-10 to invest in weapons that can meet modern-day threats posed by peer adversaries like Russia and China.

Last year, Congress blocked the Air Force’s plan to divest 42 A-10s, including 35 at Davis-Monthan, as part of a plan to turn D-M into a center for combat search and rescue units.

The retirement ban in the fiscal 2022 National Defense Authorization Act marked the fifth time since 2014 that Congress has rejected all or part of the Air Force’s A-10 retirement plans, led in large part by members of the Arizona congressional delegation.

D-M is home to the largest contingent of A-10s in the fleet, with 83 Warthogs flown by two active-duty squadrons under the host 355th Wing and one Air Force Reserve A-10 squadron.

Supporters of the A-10 — affectionately known as the “Warthog” — say the Air Force must keep the A-10 flying because it has no replacement for its specialized capabilities for close air support of ground troops.

As recently as last year, the Air Force said it plans to keep 218 combat-capable A-10s flying into the 2030s.

But a recent report by the nonprofit Project on Government Oversight (POGO) shows that the Air Force has essentially hollowed out the A-10 fleet by starving it of critical maintenance including new wings and upgrades to a central computer system.

The group published a slideshow briefing by the head of the A-10 maintenance program at Hill Air Force Base in Utah dated March 22, detailing how the Air Force has delayed maintenance including a wing-replacement program needed to keep the A-10s flying, put off installations of an upgraded onboard computer system required for deployment, and shifted maintenance resources away from the fleet to create a massive backlog of repair work.

As a result, the Air Force briefing by A-10 system program manager Pam Lee, 145 of the remaining 281 Warthogs are “non-deployable” — meaning they do not have enough flying hours left before major maintenance is required to serve a six-month overseas deployment.

But long after the Air Force first called for the A-10s retirement in 2014, the Warthog continued to be deployed to Afghanistan and against Islamic State militants in Syria.

A-10s also have been sent to Europe in recent years as a demonstration against Russian aggression — 10 A-10s based in Maryland were recently sent to Eastern Europe for a major annual exercise even as the war rages on in Ukraine.

The POGO report notes that the Air Force briefing sums up the effect of neglected maintenance: “Take Away: AF resourced A-10 to divest yet flew it like an enduring fleet, rapidly accelerating decline toward today’s hollowing fleet.”

The Air Force did not respond to requests for comment on the report by POGO, which is part of the nonprofit Center for Defense information in Washington, D.C., which was founded by retired military officers in 1971.

The Air Force confirmed to Air Force Times that the A-10 briefing slides were genuine but declined to comment.

Grazier, a former Marine Corps tank captain who served in Iraq and Afghanistan, said the nation has no other platform dedicated to the close air support of ground troops and there is no reason why the A-10 cannot continue to serve.

“There’s nothing inherently wrong with old aircraft — if an aircraft was well-designed originally and then maintained properly throughout the years, you can get a lot of use out of it,” Grazier said, citing upgrades to the 1950s-era B-52 bomber expected to keep the bomber flying into the 2050s.

Developed in the 1970s to provide close air support against targets including armor, the A-10 flies low and relatively slow and has high visibility to allow it to precisely target its 30-millimeter nose cannon. It has often been used for forward air-traffic control and to support combat search-and-rescue operations.

The latest version, the A-10C, has been upgraded with many modern electronics, including helmet-mounted targeting systems and the jamming and targeting pods.

But without new wings and other required upgrades, many Warthogs will be grounded, the Air Force briefing shows.

Not only has the Air Force slow-walked needed A-10 maintenance and upgrades, Grazier said, but the service has failed to launch a program to develop a new aircraft to fill the Warthog’s role in close air support.

A former A-10 pilot said he was outraged by the tone of the Air Force briefing published by POGO, though it reflects what he’s heard from the A-10 community.

“It came across as very flippant, like the Air Force is going to do whatever they want regardless of what Congress or the people want,” said Tom Norris, a Tucson-area resident who retired as a lieutenant colonel in 2008.

“They are pulling parts off one aircraft to put on another, literally,” said Norris, an A-10 pilot at D-M who served in Operation Desert Storm and Operation Iraqi Freedom.

Norris and Grazier said the Air Force’s argument about the A-10 being vulnerable to modern air defenses is bogus, noting that A-10s operate near troops and missions in contested area would typically include suppression of air defenses before A-10s or rescue units arrive, for example.

Arizona Sen. Mark Kelly, a former Navy pilot who helped block the A-10 retirements last year as a member of the Senate Armed Services Committee, is aware of POGO’s A-10 report and has serious concerns about it, his office told the Star.

“I’m concerned that the Air Force is not following through on its duty to maintain our active A-10 fleet — many of which are at Davis-Monthan — and am continuing to push for answers and accountability,” Kelly told the Star in an emailed comment. “At the same time, I’m working alongside DM50, the larger Davis-Monthan community, and the Air Force to ensure there is transparency and adequate planning for current and future Davis-Monthan missions.”

Kelly succeeded in attaching an amendment to the omnibus federal spending bill passed in March, requiring the Secretary of the Air Force within 30 days of the submission of the president’s budget to submit a report detailing any proposed A-10 divestments over the next five years.

The report must include “new budget and strategy details on how they will mitigate mission or personnel impacts,” Kelly’s office said.

The Biden administration submitted its budget to Congress on March 28; Kelly’s office said he is still awaiting the Air Force’s report.

In a letter to President Biden last June supporting the A-10, Kelly and other members of Arizona’s congressional delegation asked why in fiscal 2021 the Air Force had spent only $15.6 million, or about 15%, of $100 million funds requested and appropriated to sustain the A-10 fleet into the 2030s.

Kelly recently submitted questions to Air Force leaders asking why the service is not asking for any new funding for A-10 wing procurement in its 2023 budget request, when the Air Force has only procured enough wings for 218 planes.

He also asked about reports that the Air Force intends to replace some A-10 wings with used wings from “the Boneyard” — the 309th Aircraft Maintenance and Regeneration Group at Davis-Monthan, home to 101 mothballed Warthogs.

Kelly’s advocacy of the A-10 continues a long, bipartisan tradition of Arizona congressional members supporting the Warthog and D-M, including former Rep. Ron Barber, a Democrat; former Representative and Sen. Martha McSally — a Republican and former A-10 combat pilot; and the late Sen. John McCain, a former Navy aviator.

POGO’s Grazier said he hopes his report will lead to a full investigation into the Air Force’s handling of the A-10 and its defiance of Congress.

” Congress should be hailing a number of Air Force officials from over the years to answer for their open defiance of multiple pieces of legislation,” he said. “The actions of the Air Force go totally against the long tradition of civilian control of the military (by Congress), beyond the arguments surrounding the A-10 and close air support.”

He noted that in 2018, the Air Force under orders from Congress held a “fly-off” between the A-10 and the F-35 next-generation fighter to compare their effectiveness at close air support.

The Air Force has yet to deliver to Congress a report on the flyoff, Grazier said, adding that sources have told him that the A-10s performed well without any aircraft losses during the simulation.

Norris, the former A-10 pilot, said he hopes Congress holds the Air Force accountable, calling for an audit of the A-10 program.

“As a taxpayer, the Air Force didn’t do what the intention of Congress was and not only that, they withheld information,” he said, citing the importance of the close air-support mission.

“What we’re talking about here is life and death, no hyperbole — when our ground troops need support, I think they need the best.”

The lawmakers’ ban on A-10 retirements last year prompted the Air Force to pause plans to move additional combat search-and-rescue units to D-M from Nellis Air Force Base in Nevada to turn D-M into a “center of excellence” for search and rescue.

The DM50, a longtime group of Tucson-area civic and business leaders that support Davis-Monthan, had supported that plan as a way to guarantee the base’s future as the A-10s are eventually retired.

But that plan was contingent on the retirement of 35 A-10s at D-M.

DM50 member Stephen Fleming, a University of Arizona technology and business-development leader who sits on the group’s public-policy committee, said the group wants to see the A-10 fly as long as possible but the base needs to be positioned to take on new missions when they are finally retired.

“We want to see more flying missions come to our base, because we have a lot of a major infrastructure and support that a lot of bases don’t have,” Fleming said. “We don’t want the Air Force thinking of D-M as just ‘the A-10 base.”

Besides the A-10 mission under the 355th Wing and the 309th AMARG “Boneyard,” D-M hosts a major combat search and rescue contingent, including the 563rd Rescue Group; the Air Force’s only electronic combat group; and the headquarters of the Twelfth Air Force, the air component of the U.S. Southern Command. D-M, also hosts a contingent of F-16s that perform homeland-security missions, a major U.S. Customs and Border Patrol base.

D-M has been a finalist but has been passed over so far as a base for the next generation F-35 stealth fighter, after Air Force environmental studies showed it would have significant noise impacts on neighbors of the urban base.

Kelly and other members of the Arizona delegation say they will continue to push for new missions to secure D-M’s future, while preserving the A-10 in the absence of any suitable replacement.

“We’d welcome the (search and rescue) Center of Excellence and are working on what is needed to support it, and I’m continuing to lead conversations with the Air Force about additional missions well-suited for the base, including next generation fighters,” Kelly said.

Manage Cookie Consent
To provide the best experiences, we use technologies like cookies to store and/or access device information. Consenting to these technologies will allow us to process data such as browsing behavior or unique IDs on this site. Not consenting or withdrawing consent, may adversely affect certain features and functions.
Manage options Manage services Manage vendors Read more about these purposes
View preferences
{title} {title} {title}
Go to Top